The Bardenas Reales, Greener than Ever

Tweet
Although Navarre is more known for its impressive mountains situated in the north, this province is also home to a desert (semi-desert to be exact). The natural park of the Bardenas Reales extends over 42,500 hectares and comprises a substantial chunk of southern Navarre.

We had the chance to visit recently and were amazed at how the landscape changed within a relative short drive from the north. We traversed over a snow covered mountain from the Spanish Basque Country and then through the lush, green, country-side full of rolling hills for as far as the eye could see. In the last 20 minutes of the trip the landscape started to change once again and I felt as though I were suddenly far away from the Basque Country, perhaps further south in Spain or even in another country.

However, we did notice patches of green vegetation. In fact, lots of green. This is because the area had received massive amounts of rain the previous two weeks. We had heard that part of the Bardenas were actually flooded and we weren’t sure if we would even be able to enter in our little car since most of the roads are dirt and of course, we didn’t want to get stuck out there. 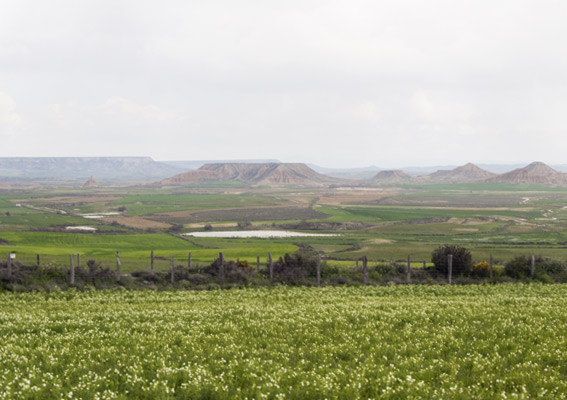 The Bardenas Reales, Greener than Ever

We made our way down the paved entrance road to the park and were able to arrive to the tourist information center located a few kilometers from the park’s entrance. There we were informed that we were in luck and the main road was accessible. If we had arrived a few days previous, it would have been blocked. The worker also told us that were we going to see the Bardenas greener than ever. She was definitely right about that!

We proceeded deeper into the park and found prairie-like landscapes of thick, green grass contrasted by mountains of brownish-red mud. I have seen pictures of the Bardenas before and I don’t think it is so normal to have so much vegetation growing. But I think that just made our experience even more special.

Since there isn’t much going on in the Bardenas Reales, the spanish military has been using parts of the park for military practices. We noticed the evidence of this upon entry when we saw fighter jets soaring above and doing some crazy acrobatics. I got a little bit of an Area 51 vibe from it but it was still pretty cool. We did after all get a free air show. 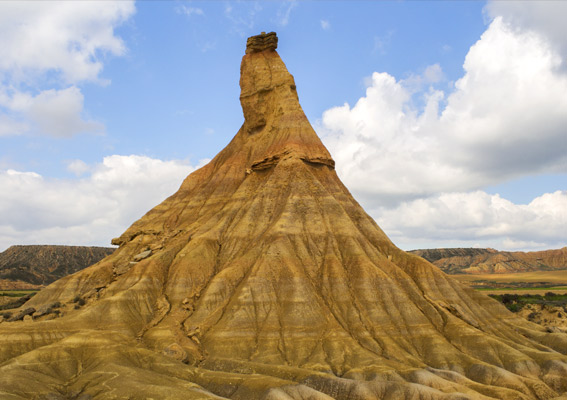 Castildetierra at the Bardenas Reales

At one point, the road ends at a part of the military base and you have to turn left. This is where I was flagged down by a Policía. I thought I was going to be in trouble for hauling butt down the empty desert road or perhaps that I had even taken a wrong turn and was somewhere I shouldn’t have been. When I rolled down the window the officer told us that we could in fact turn left and continue deeper into the park. He continued saying that he had to inform us that the military was using live fire and that they could not accept responsibility for us if something were to happen! Our jaws dropped and we all traded perplexing glances with one another. “So what does that mean?” I asked. The officer paused, then laughed and told us not to worry that it was safe. Somewhat reassured, we continued our journey. But in the back of my mind I though, “well, if something were to happen here…would it even be reported? Would some secret military cover-up be involved?”

I was sure glad to see more tourists and families further down the road. Somehow that told me that this was a legit natural park and that no one would be dying in the military games that take place there. 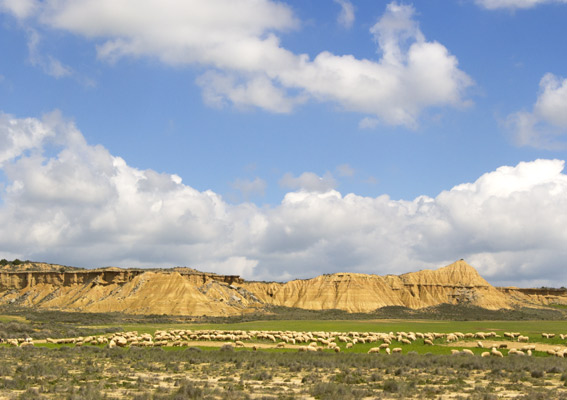 Flock of sheep at the Bardenas Reales

In the end we were able to make our way around and get out at some places to walk around. It was a gorgeous day and we were able to get a good taste of what the Bardenas Reales has to offer. Now, I am excited to go back again and rent a bike. There are many paths within the park that are only accessible by either bike or by foot and I have the feeling that those are probably the most impressive areas. Especially since most of those paths are in areas that are protected.

Check out our full guide for the Bardenas Reales.