Tweet
There is no doubt that the Basques have been around for a long time – a very long time. No one knows exactly how long they have called their small region home but what is for sure, is that they were some of the original inhabitants of Europe, arriving long before the Romans. Their language, known as Euskera (Basque), is the only surviving pre-Indo-European language in Europe. Others such as Etruscan, Minoan and Iberian only exist in inscriptions.

Their unique language is not the only thing from their ancient culture that has survived. Today, the Basques still have their own mythology that is rich in legends about their origins. There are many stories that feature superhuman characters such as the Basajaun, who is said to be a hairy hominoid like creature that lives in the woods (think of him as a Basque Bigfoot). In addition to mythology, there is also a plethora of other traditions such as rural sports and the use of strange old instruments such as the txalaparta or the albokari. The Basque culture is still very much alive and well, and one of the best places to learn about it is in one of the Basque museums. There, you can come face-to-face with one of Europe’s oldest cultures and find out about the Basques of today and of ancient times.

Below, we have put together the four main Basque museums in the Basque Country. Just like any other kind of museum, each one is a little bit different. But if you are interested in finding out more about the people and the culture, then we highly recommend checking out at least one of the museums below. 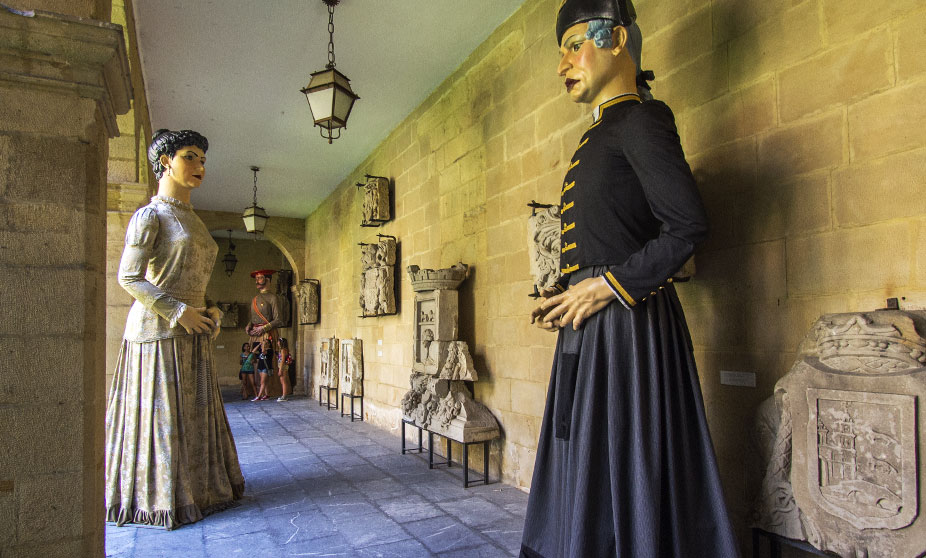 Exhibition of Giants and Big Heads in Bilbao’s Basque Museum

Bilbao’s Basque Museum is located in the heart of the city’s old town, in a beautiful 16th century building that was originally used as a jesuit church and school. It first opened its doors as a museum in 1921 and today, contains a permanent collection related to Basque ethnography as well as Basque culture and traditions throughout history – from ancient times to the 21st century.

The ground level of Bilbao‘s Basque Museum is characterized by a stunning inner courtyard. In it, visitors will also find several prehistoric and medieval sculptures.

The first floor of the museum is dedicated to ethnography. One of the rooms pays tribute to the long maritime tradition in the Basque Country. The Basques were famous whale hunters for centuries (and today are still avid fishermen). They were known to venture as far as Brazil and Iceland in search of the massive beasts – all without the aid of any modern technology. Because of Basque whalers, Iceland even had a law allowing for any Basque to be killed on sight which was only just repealed in 2015!

On the same floor as the whaling exhibit, there is also some space dedicated to Basque shepherds and other traditional agricultural activities and crafts, which were and still are an important part of the life of many Basques.

On the second floor visitors will find traditional clothing, furniture, household goods, toys and sporting equipment, etc. The third and last floor is dedicated to history and one of its highlights is a massive cartographic model of Bilbao from 1962-1970.

Bilbao’s Basque Museum also organizes temporary exhibitions. For the last couple of years, during summer (July and August) the museum exhibits a very peculiar collection of Giants and Big Heads – the ones used to entertain kids and adults during the Aste Nagusia Festival. This exhibition is made up of 20 giants of over 4 meters of height and 10 Big Heads. A very impressive and at the same time fun exhibition worth checking out!

ADMISSION
General: 3 €
Reduced (students, groups of 10 or more): 1.5 €
Under 12 years, over 65 years, handicapped, unemployed: free
* Free for everyone on Thursdays 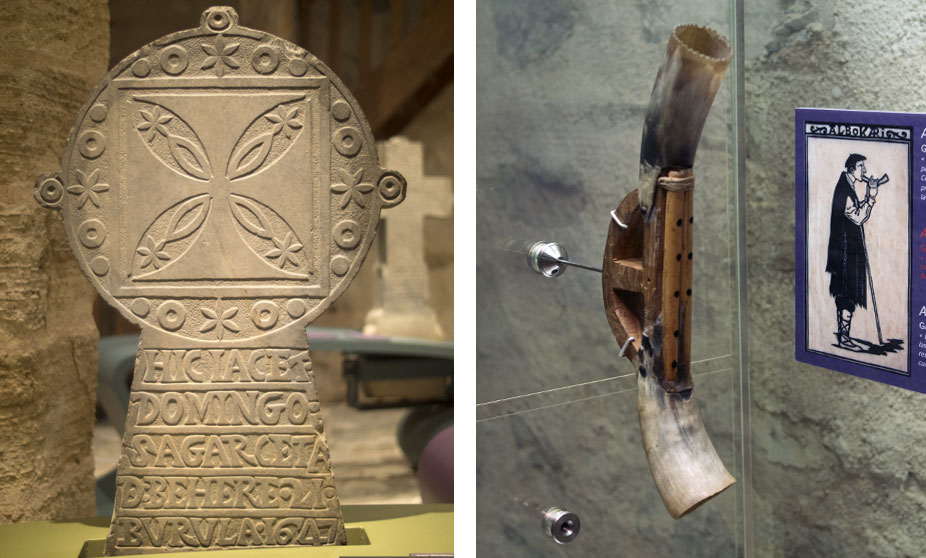 The Basque and Bayonne History Museum is housed in a small palace from the late 16th century called Maison Dagourette. Located on the banks of the River Nive, this museum contains a fascinating collection of Basque and local French history.

The museum, which opened its doors in 1924, is currently divided in three floors. The ground level is dedicated to Basque rural life – mainly agriculture and pastoralism – and contains a large collection of artifacts that show the everyday life of Basque farmers and shepherds centuries ago. There is also a collection of tomb stones, some of them dating back to the 16th century. The inscriptions used on the tombs served as inspiration for the distinct Basque typography (Basque letters) that can now be found throughout the entire Basque region.

The first floor of the museum is devoted to economic and domestic life. On it you will find elements from the traditional Basque house, such as kitchen utensils, furniture, etc. There is also an area related to maritime life, not only regarding fishing, but also commerce, war and emigration. The museum reminds us that apart from fishing, the ocean was also the source of wealth for most of the Basque bourgeoisie from the 17th to the 19th century. The paintings, coins, jewelry and furniture from that time period found in the museum were bought with the wealth that arrived to the Basque ports in vessels –  especially to the port of Saint Jean de Luz, which was home of the Basque corsairs at the time.

The second floor, features Basque sports, especially Basque pelota which today is still one of the most popular sports in the region.

Apart from temporary exhibitions, the Basque and Bayonne History Museum also houses a library, which is one of the most important regarding Basques. The library is made up of over 30.000 documents about Basque culture, newspapers and magazines from the 19th and 20th centuries as well as classical books of Basque authors.

ADMISSION
General: 7.5 €
Reduced: 5 €
Under 26 years: free
* Free for everyone the first Sunday of the month 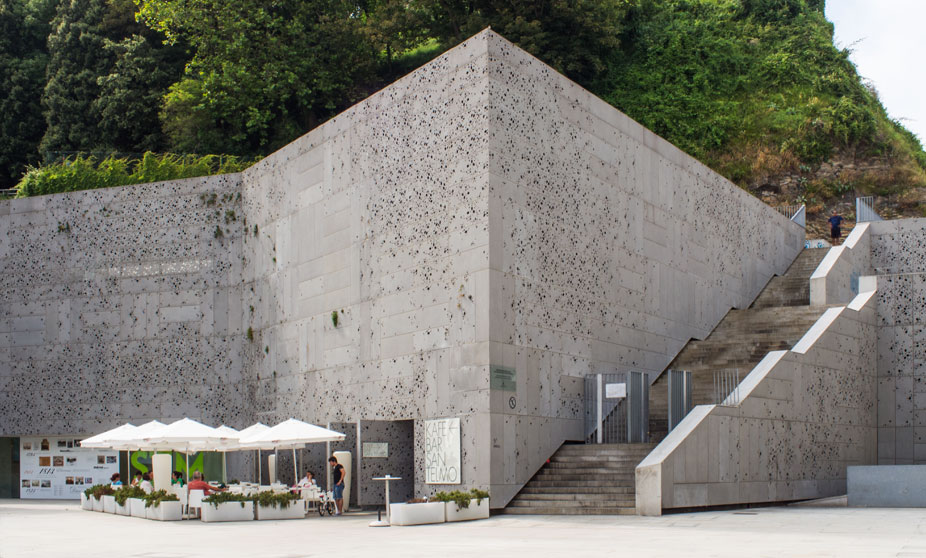 Exterior of the San Telmo Museum

The San Telmo Museum first opened its doors in 1902, making it the oldest museum in the Basque Country. It is located in San Sebastian’s old town and its impressive architecture can actually be considered one of the highlights of the museum. The complex that forms the museum is divided in two: a 16th century dominican convent and a new building that was added during the recent renovation (2007-2011). This new contemporary building has become an architectural jewel incrusted in the hillside of Mount Urgull.

Since its renovation, the museum has transformed into a space dedicated to Basque society. The permanent exhibition of the San Telmo Museum is made up of over 26,000 pieces of various different categories – ethnography, art, photography, archeology and history. One of the highlights of the museum are the murals painted by José María Sert in 1932. These magnificent murals cover the walls of the church and depict scenes of the life and history of Gipuzkoa.

Also in the museum, you will find a great exhibition that covers more modern Basque history. It gives some nice insight into the political strife and the fight for independence.

The San Telmo Museum is the best museum in San Sebastian and one of our favorites in the whole Basque Country.

ADMISSION
General: 6 €
Students and seniors: 3 €
Under 18 years, unemployed: free
* Free for everyone on Tuesdays

Overview of the San Telmo Museum 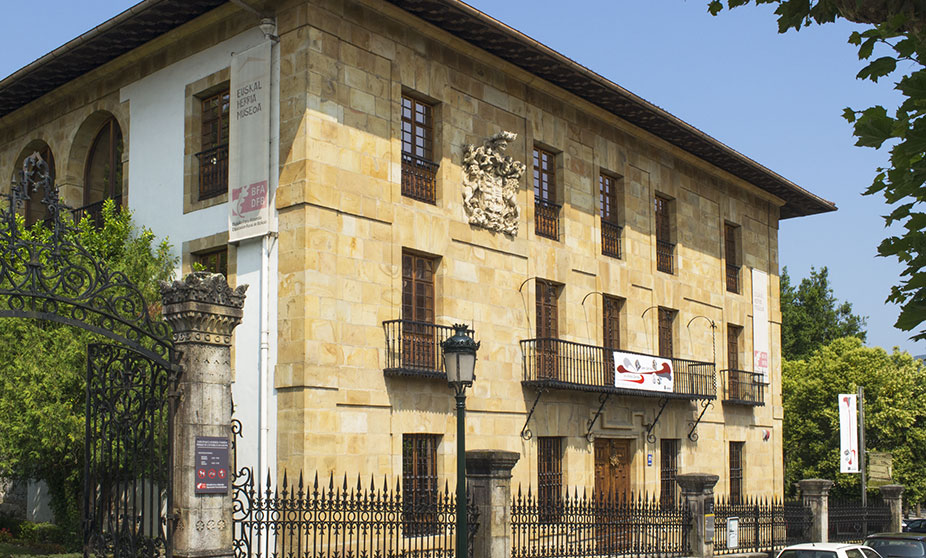 Exterior of the Euskal Herria Museum

The Euskal Herria Museum is located in a Baroque style building known as the Alegría or Montefuerte Palace which was reconstructed in 1733 from a medieval tower. The building was lucky to survive the bombing of Gernika in 1937 and, since the early 1980’s, it has functioned as a museum with the main objective being to show the historical, political and cultural significance of the people that inhabit Euskal Herria.

The ground floor houses an exhibition about the building’s history as well as the evolution of the first settlements. On it, visitors will find some impressive prehistoric art as well as a historic cartographic collection.

The first floor is dedicated to the historical evolution of the region and the events that have resulted in the current political configuration. For example, visitors will learn about the fueros – a set of traditional laws similar to a constitution – which were granted to the Basques in the middle ages and fought for in several wars (Carlists Wars) in the 19th century.

The second and third floors are devoted to Basque culture: Basque language, rural sports, music, dance, beliefs, mythology and gastronomy. Apart from the nice collection of objects and artifacts, the multimedia and audiovisual support makes for a much more entertaining experience.

In addition to the four main Basque Museums, there are several other smaller museums with exhibitions focusing on the Basque people and their history. Here are just a few of them:

And of course, there are also many more specific museums in the Basque Country related to distinct parts of the culture and life of the Basque people.

Although we haven’t mentioned them all, if there is another museum related to the Basque culture and traditions that you would like to point out, please feel free to do so in the comments!