Tweet
Euskal Pastela, Gateau Basque, Pastel Vasco are all the same names used for the delicious cream and marmalade filled Basque Cake. This typical Basque dessert is thought to have its origins in Cambo (Labourd) in the 17th century. During this time, the cake was without name and people who traveled to the Basque region began to call it “the cake of the Basques.” So this simple cake got a simple name and has since become a symbol of the Basque Country. However, today it is still more popular in the French Basque Country and therefore, it is most commonly referred to by its french name, “Gâteau Basque”.

Although today there are many variations of Gâteau Basque, the original recipes used fruit found around the baserris such as moras (blackberries) and endrinas (sloe berries). It wasn’t until the end of the 19th century that cream began to be added to it. This is also the time when Biarritz started to become a popular tourist destination. Visitors tried the cake there and then helped it spread to the rest of France.

Some Gâteau Basques are made with cream, some with marmalade, some are thick and more cake-like and others are thiner and crispier on the outside. Sometimes they are prepared so that the cream is partially absorbed into the dough creating an overall moister cake. And other times they are prepared with more separation between the crispy crust and the unadulterated cream in the middle. Everyone makes it a little different. Some are of course better than others. But once you are able to get a good base for the cake, it is really easy to experiment with it and make a huge variety of goodness. 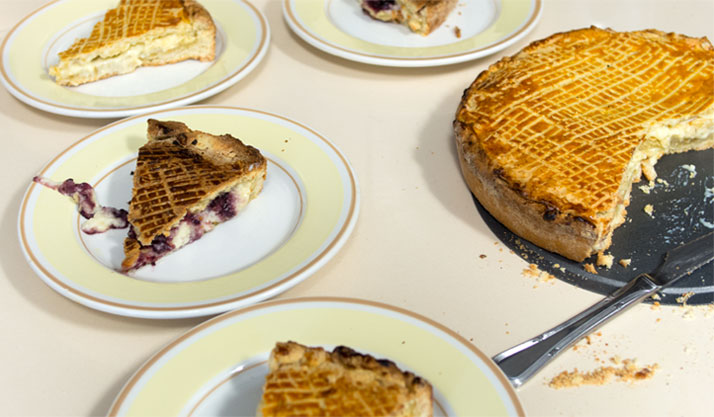 Below is our version of Basque Cake. The cake should have a cookie-like crust with a nice creamy filling. We prefer the cream and crust to be separated more and find that the contrast between the dry crust and moist cream to be much tastier!

Cream
500 ml whole milk
2 egg yolks
50 gr (1/4 cup) sugar
2 tablespoons of cornflour
lemon rind (a slice will do)
1 cinnamon stick (you can also use powder, but a stick is better)
Optional: 2 tablespoons of patxaran (or rum, brandy)
Marmalade of blackberries (cherries or raspberries, pretty much any flavor is tasty)
1 egg yolk

TO MAKE THE CRUST:
1.  Put butter in freezer 1 hour before start cooking.
2.  Take butter out of the freezer and cut it in small cubes.
3.  In a big bowl, mix cubes of butter with flour, sugar & almonds.
4.  With a fork, mix ingredients well but not so much that it becomes a homogeneous mixture.
5.  In a bowl, beat two eggs, add patxaran (or rum or brandy) and mix them.
6.  Add eggs with patxaran to the big bowl and mix.
7.  Put mixture in transparent film, shape it as a big sausage and put it in the fridge. It has to be in the fridge for at least an hour and even throwing it in the freezer for a while is a good idea.

TO MAKE THE CREAM:
1.  Combine milk, cinnamon and lemon rind in a pot & slowly heat until it reaches a boil.
2.  While waiting, combine cornflour with a little bit of cold milk in a glass and stir to dissolve.
3.  Beat egg yolks. Add cornflour/milk & sugar to it.
4.  Add patxaran (or rum or brandy).
5.  When milk with the cinnamon and lemon is boiling, turn burner off and let cool down for 5 minutes. Remove cinnamon stick and lemon rind.
6.  Slowly add egg mixture to warm milk while stirring it.

7.  Put the pot back on burner to a medium heat (don’t let it come to a boil) & stir continuously without stopping (this is very important). The mixture should start thickening in 5-10 minutes.
8.  When mixture has thickened enough, turn burner off and let cool down for a bit. The thickness should be that of a runny pudding. After it has been in the fridge it will continue to thicken and get that pudding-like thickness.
9.  Pour cream in container and let it cool down for 10 minutes. Stir a couple of times during those 10 minutes.
10.  Cover cream with transparent film, putting the film directly on top of the cream, to avoid leaving any air inside.
11.  Put cream in the fridge and leave it there for at least 1 hour. * It is important that the cream is also cold because if it is warm when we put it in the oven it will grow and break the top layer of the cake. 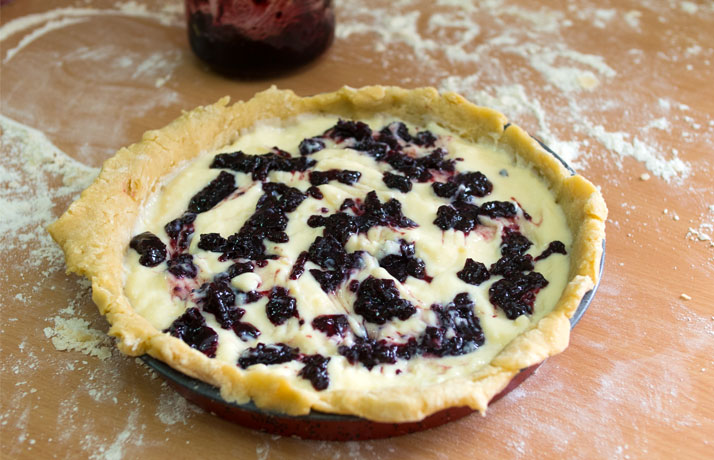 Marmalade added to the Gateau Basque

TO BUILD THE CAKE:
Now the slightly more difficult part – it’s not too difficult though 😉 The dough can be very gooey and that can make it difficult to put into the pan. That is why it needs to be really cold. Once the dough is really cold and not so sticky, it can be rolled out.
1.  Take dough out of fridge/freezer & divide it in two: 2/3 for the bottom, 1/3 for the top.
2.  Place 1/3 dough back in fridge/freezer.
It is best to use two sheets of baking paper when rolling the dough out.
3.  Put a little bit of flour on the first sheet and then place your big chunk of dough in the center of it.
4.  Get a little bit of flour on your hands and pat it down some.
5.  Sprinkle a little flour onto your fat wheel shape of dough and place the other sheet of baking paper on top. Then get a roller and roll it out until it has a thickness of about 6mm (1/4 inch).
6.  Place the bottom portion into baking mold. Put the mold in the fridge.
7.  Preheat oven to 180°C (355°F).
8.  Now, take out the other 1/3 portion and roll it out in the same way.
9.  Take the mold, the cream & marmalade out of fridge. Fill mold with cream and put a few dabs of marmalade throughout.
10.  Put the dough top on.
11.  With your fingers, join dough together at the edges.
12.  Beat an egg yolk and spread it on top of cake (you can use your fingers if you don’t have a brush).
13.  With a fork, score the cake and voila, it’s ready to be put in the oven. Leave in the oven for around 35 minutes.
Let it cool down for at least one hour before serving.