The most popular Basque sport is also the most simple. Pelota mano, which means hand ball, is a type of pelota vasca (Basque ball) that is based on players whacking a hard ball against a wall, called a fronton, with little more than their hands. The game is played throughout the Basque Country by young and old alike and has a large following of both players and spectators.
Tweet 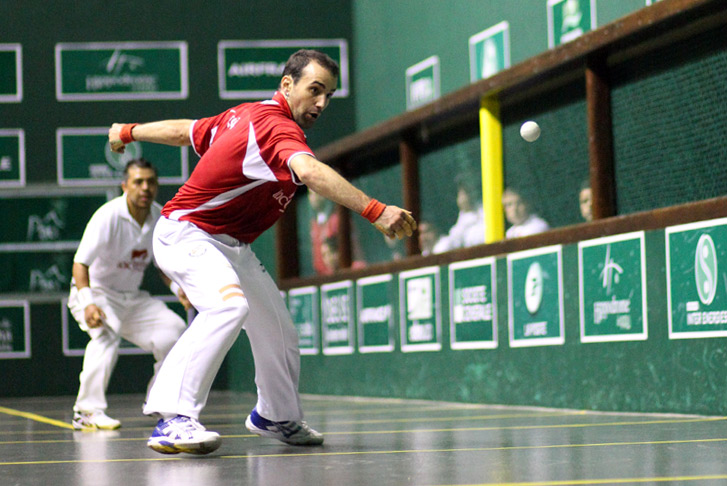 Photos: Sylvain Sangla
Pelotari just about to hit the ball 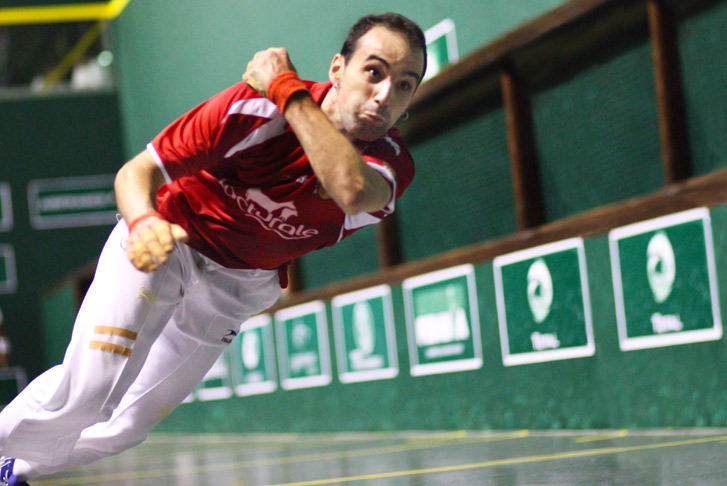 There are a few things that can be found in every Basque village or city and an outdoor fronton is one of them. Even the smallest village has at least one fronton, and in cities it is possible to have a fronton in each neighborhood. There are also many indoor frontons that are used more often for professional matches. Many of the professional matches are broadcasted on Basque TV stations.

One of the reasons for the game’s popularity is the fact that you don’t need to invest much in equipment. You basically just need a ball and a fronton. The ball however, is not soft like a tennis ball as one would imagine, since it is after all, hit with an open hand. Instead, the ball, or pelota as it’s called locally, is made from box wood that is covered by layers of latex and wool, and is topped off with a coat of leather. For this reason, it is very important for the players to protect their hands properly for the game.

The players, or pelotaris as they are called in Basque, cut small strips of various types of adhesives that are formed into particular shapes according to where they are positioned on the hand. In the end, they are able to create many small pads which cover the inside of their hands. These pads are referred to as “tacos.” (not to be confused with the mexican variety... totally different type of taco). Even with the tacos covering their hands, injuries can and do happen. Pelotaris are known for having some hardcore hands.


Video clip - how to protect the hands (*ES)

Pelota mano can be played one on one or in couples. The rules of the game are very simple. The main rule is that the ball must hit the front wall and then the other player must return the ball while it’s in the air or off the first bounce. Another important rule concerns the serve. After the ball hits the front wall, the ball must land between two designated lines called the “falta” and the “pasa” in order to be valid. With only this amount of basic knowledge of these few rules, you should be ready to check out a game and understand what is going on.

In addition to other regions of Spain, pelota mano is played in other countries as well, such as Argentina, Mexico and the USA. But nowhere else is it as popular as in the Basque Country. If you are interested in attending a professional match, have a look at the link at the end of the page.

Interesting fact…
Professional pelotaris wear white pants and either a red or blue shirt. The team who has the oldest player wears the red shirt.