OVERVIEW
THINGS TO DO
HOTELS
SURF
GET AROUND
MAP

The quaint little village of Mundaka is located on the Basque coast within the Urdaibai Biosphere Reserve. Mundaka is home to one of the longest left-hand waves in the world, making it a well known surf destination. It’s a great place to stop and check out during a day at the beach or when exploring the reserve.

Mundaka is a town of uncertain origin. Legend has it, that in the 10th century, a ship from Scotland carrying an expatriated princess arrived on the shores of Mundaka. They are said to have found a fountain of water and called it “munda aqua,” which means “clean water” in latin. The princess went on to have a son named Jaun Zuria who became the first Lord of Biscay. Although the historical facts of the story cannot be verified with certainty, what is certain is that Mundaka has played an important role in Basque history and mythology.

Today, Mundaka is a tiny but enchanting town that is centered around its fishing port. The port is situated in the most picturesque corner of the village, where locals of all ages meet and hang out, whether it’s next to the waters edge, by the park, at the fronton or at one of the several surrounding bars.

Although it’s quite a small town, Mundaka is internationally-renowned for its surfing scene. The atmosphere in town is especially nice during autumn, when surfers from all over the world begin to gather here to ride one of the longest waves in the world.

If you aren’t a surfer, it still might be worth a stop just to check out the action in the water. Apart from watching the surfers, you can also enjoy the amazing views of the Izaro Island, the Ogoño mount and the estuary of the Urdaibai River, the most iconic area of the Urdaibai Biosphere Reserve. 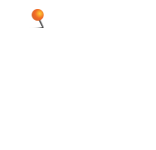 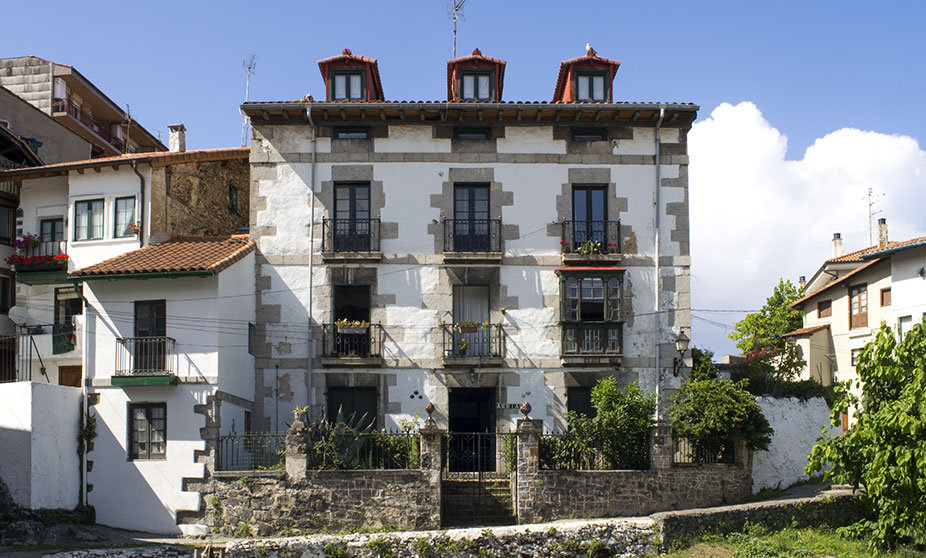 Mundaka's Top Things to Do & See

Mundaka's Things to Do & See
We have put together a hand selected list of the most important things to do and see in Mundaka – if it deals with Mundaka tourism, we’ve got you covered.
1 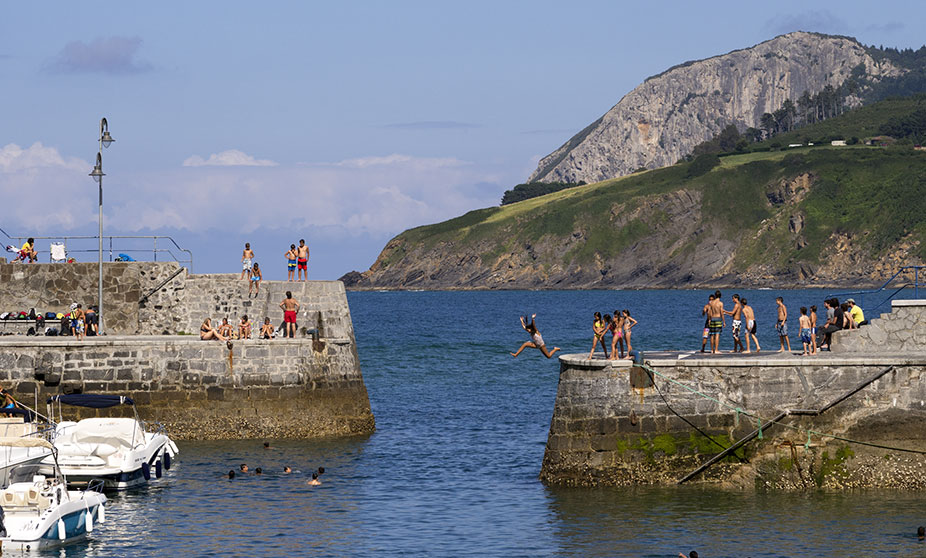 Children jumping from the dikes 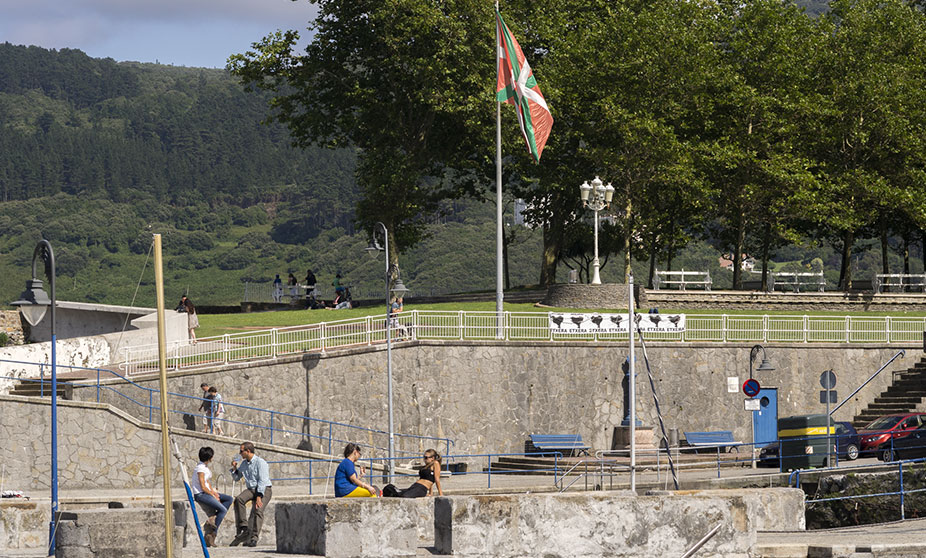 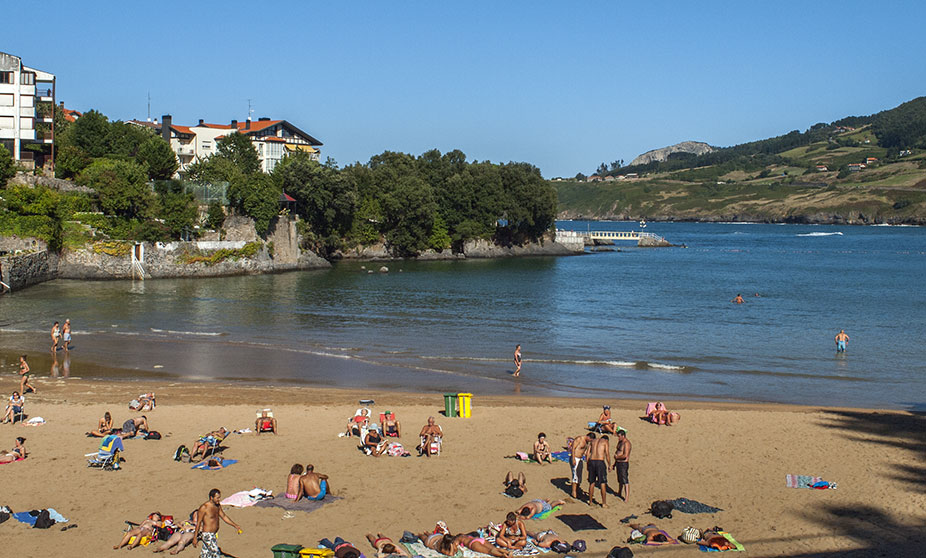 Sandy beach next to Mundaka

Beach next to Mundaka

The port is the heart of Mundaka. It is definitely the most picturesque area of the village, surrounded by colorful Basque style houses and various bars and restaurants.

Although there are several beaches in the surroundings, during the summer the locals extend their towels on the dikes that surround the old port to take in some sun. The kids in the town also love the area around the dikes, especially since they are able to jump from them into the water several meters below. 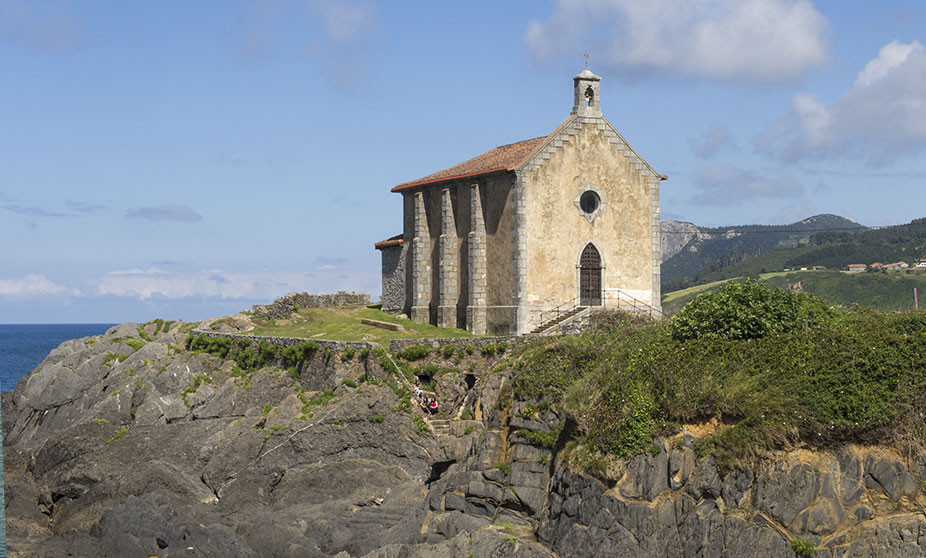 The Hermitage of Santa Catalina is located in a small green peninsula with the same name, in the outskirts of Mundaka. The hermitage has held a strategic position for the village since it could control every entry into and exit out of the estuary. However, due to the hermitage being located right next to the water, it has been damaged and destroyed many times. Although there has been a building in that same location since the Middle Ages, the hermitage that we see today is from 1879. It is a mixture of gothic and renaissance styles.

Throughout the centuries, the building has also functioned as a quarantine area for people with epidemic diseases, as well as the meeting place for the brotherhood of fishermen. It was even used for the storage of ammunition for the fortress that originally stood beside the hermitage. Today, some remnants of the fortress walls can still be seen around the church.

The Santa Maria Church is located in the center of Mundaka, right next to the water, and is surrounded by a park with a playground for children, fronton and snack bar.

Although there has been a church in that same location since at least the 11th century, the first building was destroyed by the many battles. Originally, the Tower-House of the Munaca also stood next to the church, but it too was destroyed during a battle in the 15th century. The church building that stands today is from the 16th century and is composed of gothic and renaissance styles. The tower and the portico were later added in the 19th century. 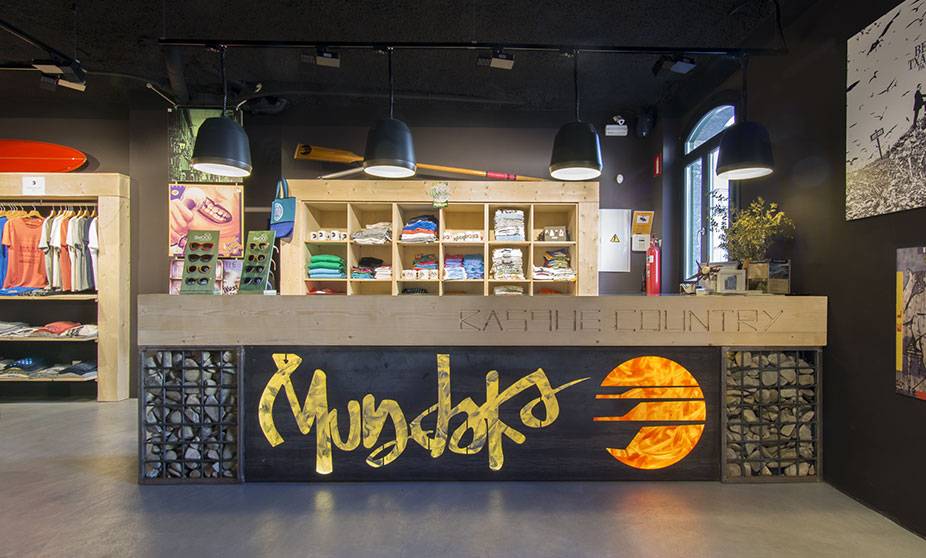 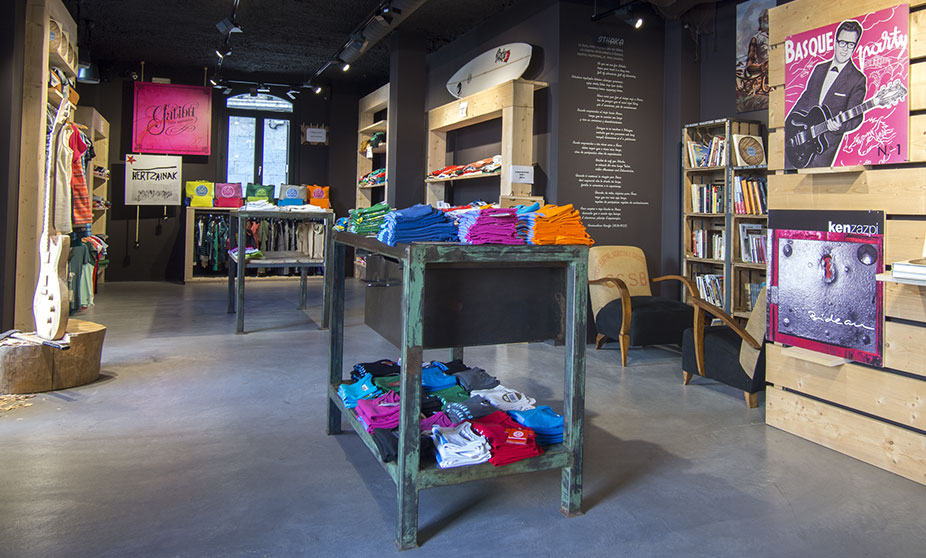 Interior of Mundaka BC

The Mundaka BC store opened its doors in August, 2013 and very quickly became a must visit place while in Mundaka. Mundaka BC is much more than a clothing or souvenirs store. Apart from selling clothes, shoes and accessories, the space is also used for exhibitions. Every couple of months there is a different exhibition at Mundaka BC, usually featuring works of local artists.

At Mundaka BC, an attempt is made to support local brands and that is why almost all the brands offered in the store are Basque: Loreak Mendian, Kukuxumuxu, Skunk Funk, etc. But in addition they have also created their own brand called Mundaka BC which is actually the star of the store. The shirts, hoodies and shoes from the Mundaka BC brand are successfully supporting the cool image that Mundaka has around the world.

Inside of the store, there is also a very special corner called Ithaka books’ corner. It tries to bring the local culture and history closer to the people. In it, you will find some works of Ernest Hemingway along with documentations about the time he spent in the area.

Apart from the Ithaka’s books’ corner and the periodic artists exhibitions, Mundaka BC is also organizing concerts from various genres of music.

Hotels in Mundaka
We have hand selected a few great hotels in Mundaka and its surroundings. However, if you want to see a complete listing of all available hotels, be sure to use the search function below. 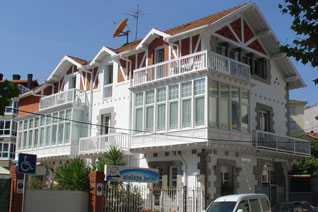 Hotel Atalaya – $$
The Hotel Atalaya is located right in the center of Mundaka, next to the Santa María Church and the port. The rooms offer garden, mountain and ocean views and feature flat screen TV, minibar and desk. The Hotel Atalaya also has a sauna, free Wi-Fi and free parking. When the weather allows it, breakfast is served on the hotel’s terrace. 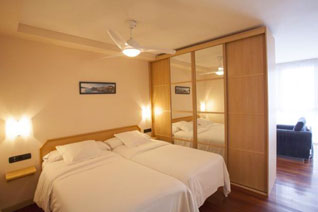 Mundaka Apartments – $$
The Mundaka Apartments are modern, large and bright apartments that offer amazing views of the Laida Beach and the river. The well-equipped kitchen has a microwave, cooking field and other utensils. The living room has a TV with cable. The apartments also feature free Wi-Fi and private parking. 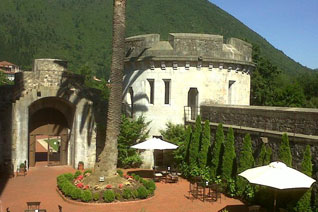 Arteaga Castle – $$
Live like a king in this 13th century castle located in the Urdaibai Biosphere Reserve and only 16 km away from Mundaka. The beautiful rooms offer air conditioning, free Wi-Fi and flat screen TV. The hotel’s restaurant offers quality Basque cuisine and there is also an extensive wine cellar, where it is possible to enjoy tasting sessions. 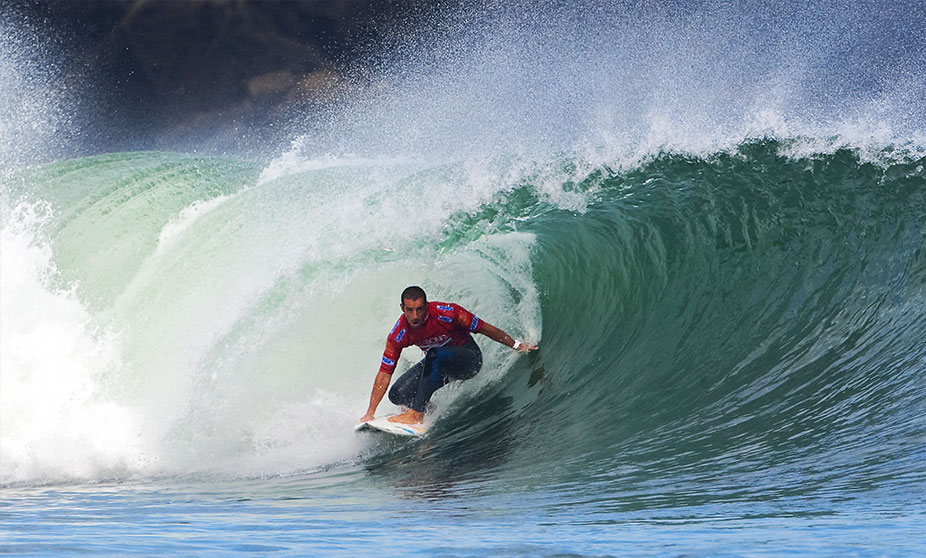 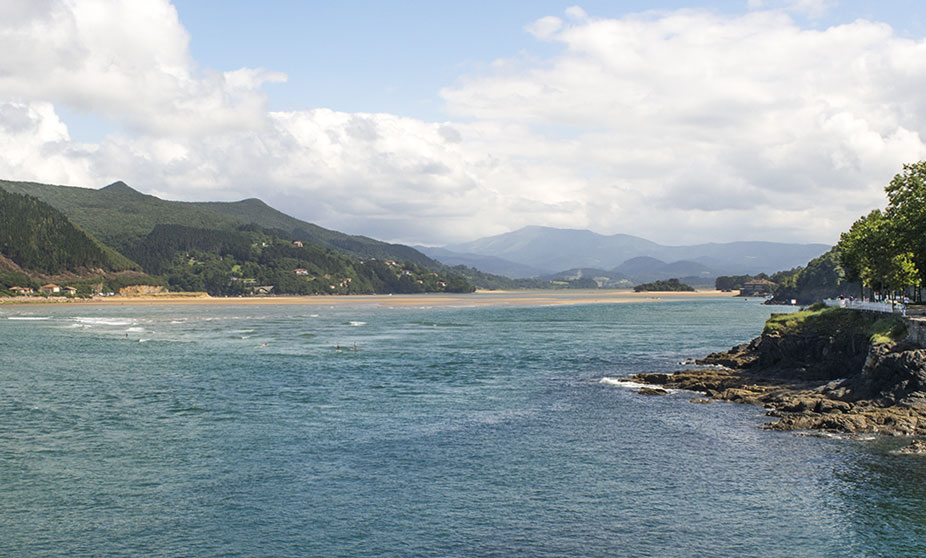 Views of the Urdaibai Estuary

Mundaka is very proud of having the best left wave of Europe and one of the best in the world. Every autumn and winter Mundaka’s streets are filled with surfers from all over the world that come to surf that famous left wave. It can reach a height of 5 m and give a ride of about 400 m.

Competitions on an international level are held in Mundaka each year. From 1998 to 2009 the Billabong Pro Mundaca was celebrated here, an event that scores for the ASP World Tour.

If you need to rent or buy some surf related gear, you will find it in Mundaka. Currently, there is one surf shop in town and three establishments offering surf courses:

Once you arrive in Mundaka, everything is reachable by foot.

PLANE – The airport of Bilbao is about 25 km away but there isn't a direct bus from the airport to Mundaka. It is necessary to go to Bilbao’s bus station first and change there. However, the bus and train connections from Bilbao to Mundaka are very good.

CAR – Mundaka is located about 40 km away from Bilbao and is connected by the road BI-631, which also goes through Bermeo and Mungia. The road BI-2235 connects Mundaka with Guernica.

Both San Sebastian and Vitoria are approximately 90 km away.

BUS – The company Bizkaibus offers buses to Bilbao, Guernica and other surrounding towns (line A3515).

TRAIN – It is possible to get into Mundaka by train. The train station is located at the Geltoki Kalea, which means “Station street.” EuskoTren offers a line that connects Bermeo with Bilbao stopping in Mundaka and various other towns. During the week, there is one train every half an hour from 6 am until 9 pm (from 7 am until 11 pm on the weekend). The trip takes about 70 minutes. 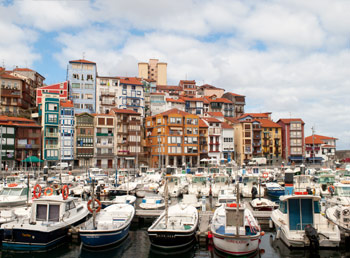 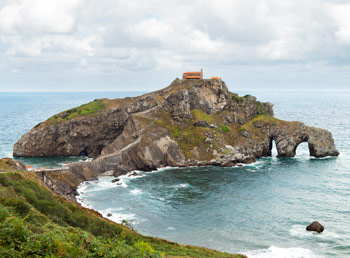 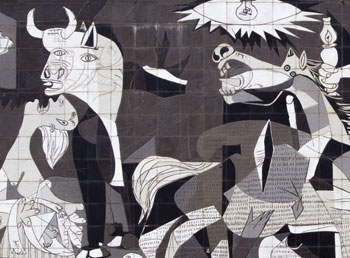 Map – Things to Do in Mundaka