Getaria is a charming fishing village where you can enjoy fresh-caught fish right at the port accompanied by the local white wine called txakoli. It is wedged between two beautiful beaches and also has a little islet that makes it for a nice hike. Moreover, it is the birth town of the famous fashion designer Balenciaga and you can visit the museum devoted to him.

Getaria is situated on the Bay of Biscay and is about 25km west of San Sebastian.

The views surrounding Getaria are amazing. You have an old town, a mountain that is an islet, a port, beaches (Gaztetape and Malkorbe), the ocean, and the rolling green hills of the getariako txakoli wine region.

All of these things make Getaria one of our favorite Basque villages. 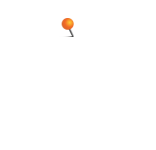 Getaria's Top Things to Do & See 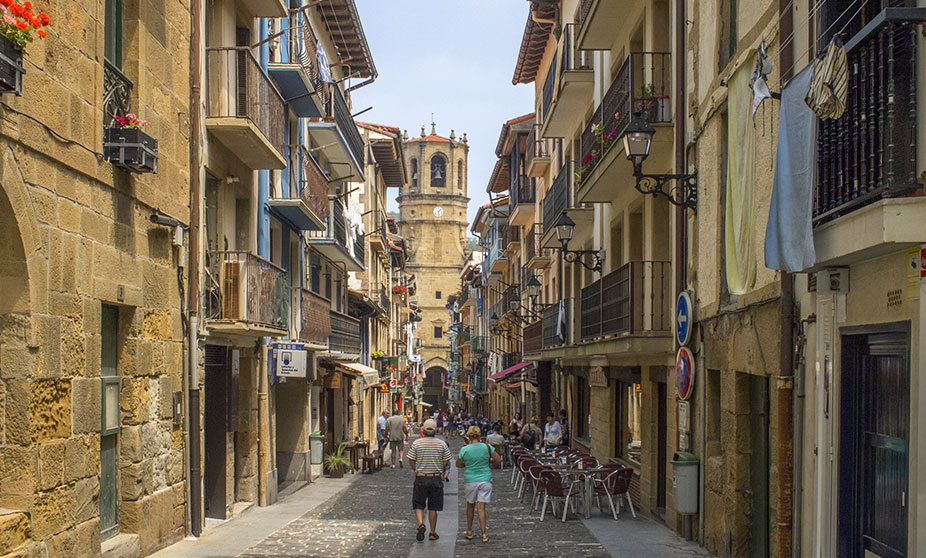 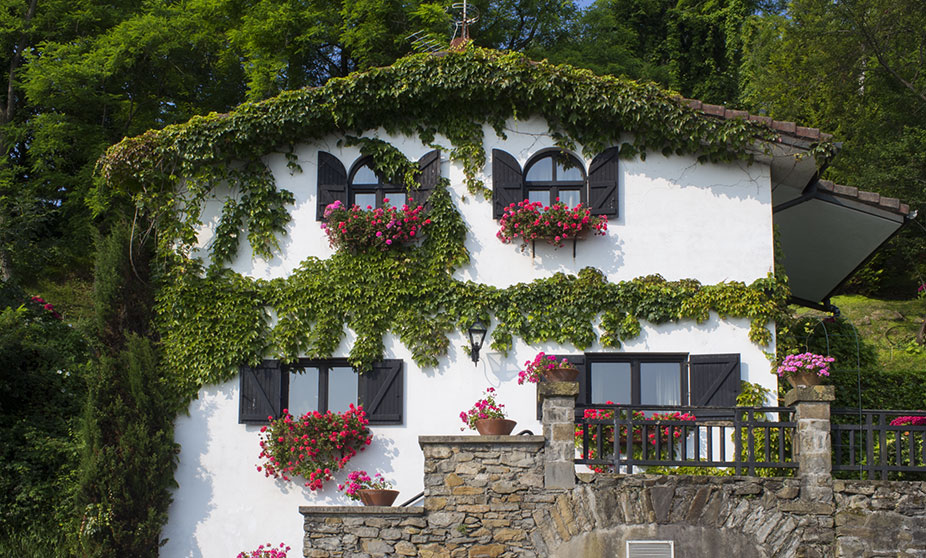 Most beautiful house in Getaria

Start off your visit by walking through the main street of

Nagusia Kalea where you can buy some local products or stop for a pintxo. Further down the street you will find the 15th century gothic

church of San Salvador. An interesting fact about this church is that its floor is inclined due to the rocky terrain on which it stands. The street continues through a tunnel that is bored underneath the church. This was used for defensive purposes in the times when the church belonged to the wall that surrounded the town. 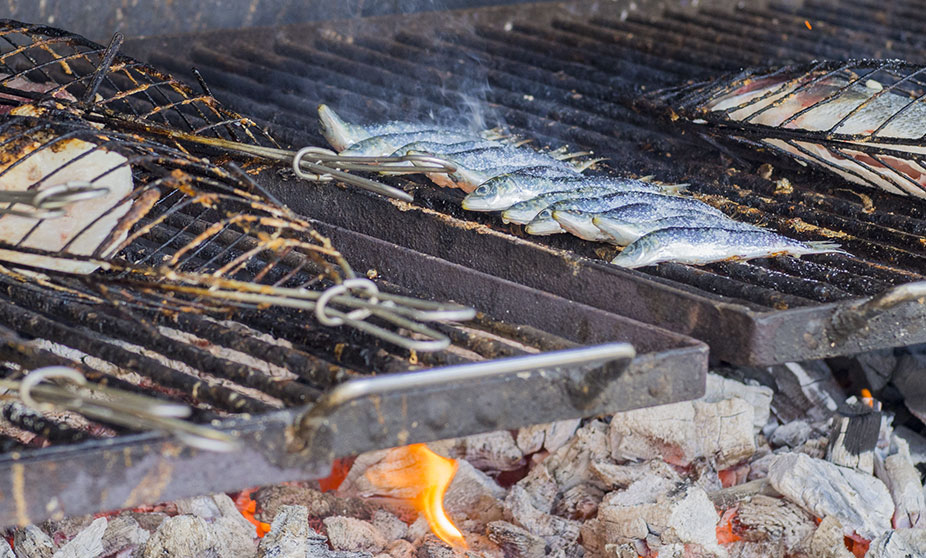 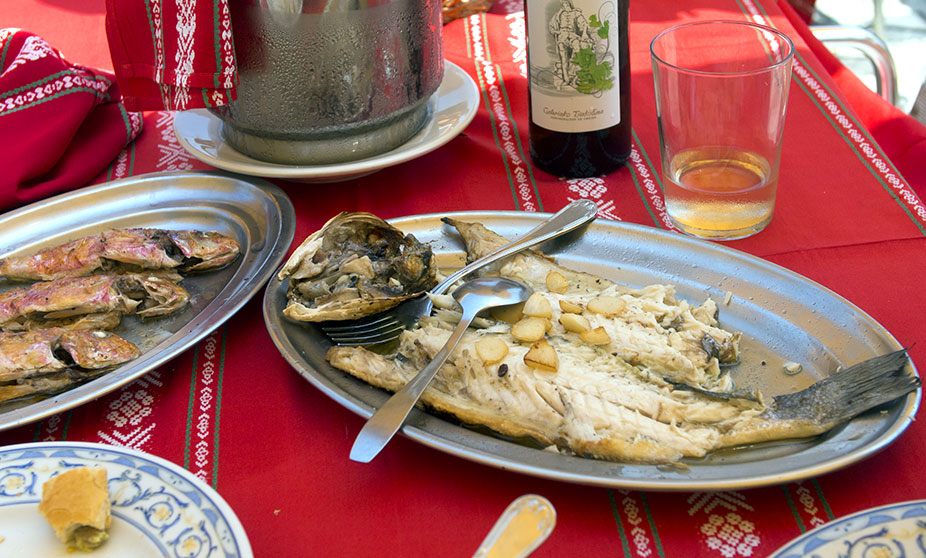 port, stop at one of the various restaurants for some grilled fish and try the local txakoli white wine. We recommend ordering the red mullets (“salmonetes” in Spanish) at the restaurant May Flower which has lovely views of the port.

If you are looking for something a little more up-scale, check out Elkano (one Michelin star) or Kaia-Kaipe. They are known for being the best of the best in Getaria. However, which restaurant you choose is not a huge deal since they are all offering the fresh-catch of the day. You can’t go wrong. 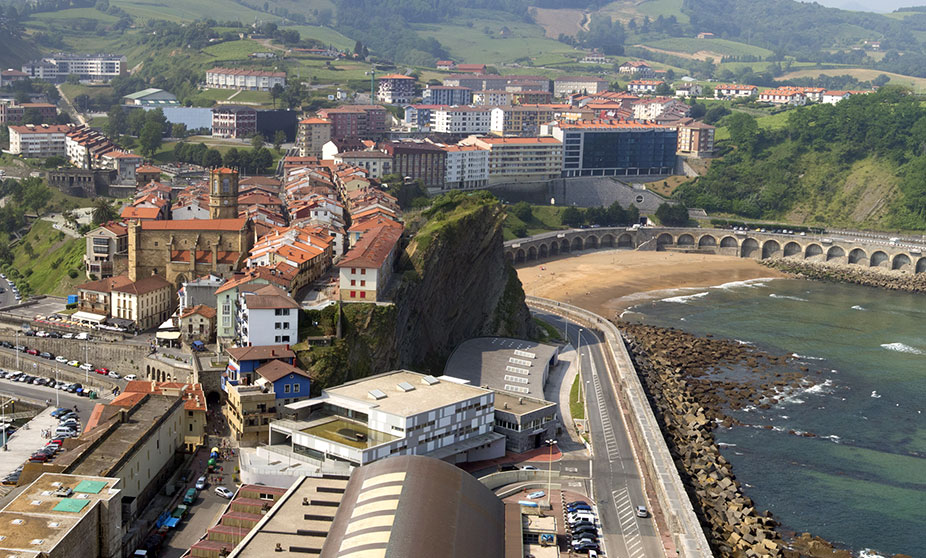 View from the top of Mount San Antón

At the end of the port is where the

Mount San Antón starts, which until the 15th century was just an island. Its shape is similar to a mouse and, for that reason, it is commonly referred to by the locals as the Ratón de Getaria (“mouse of Getaria”). The Mount San Antón is a natural park with a large variety of vegetation and animals (especially seagulls).

There are various paths heading to the top of the mountain. On the way up, you will discover the lighthouse, from which they used to observe whales (Getaria was a whaling town, much like many others on the Basque coast). If you continue to the top, you will be rewarded with beautiful panoramic views of the town and the coast. 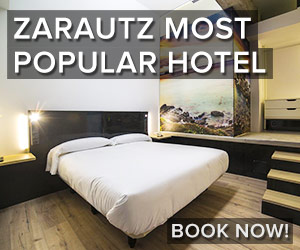 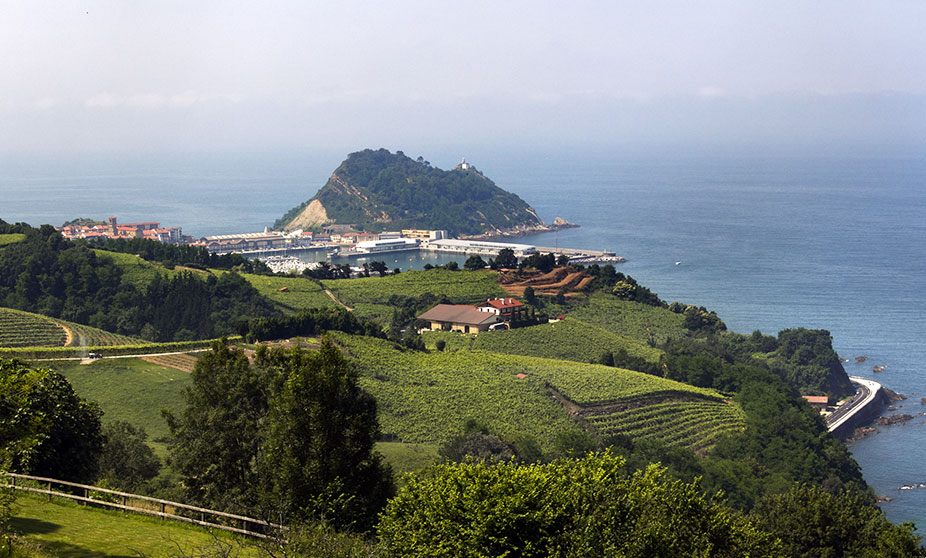 Views of Getaria & the surroundings vineyards

The surroundings of Getaria are full of txakoli vineyards. It is of course possible to try different txakolis in the bars and restaurants of the town (there is even a delicatessen store on Nagusia Kalea which sells all of the txakolis from the Getaria wine region).

But if you really want to sample the wines before you buy or just find out more about txakoli in general, it would be best to venture into the bodegas that surround the town. Most wineries are open for direct sale. Some offer wine tastings and a few also offer tours in English, such as Gaintza, Ameztoi and Txomin Etxaniz. Check the Getariako Txakolina website for more detailed information. 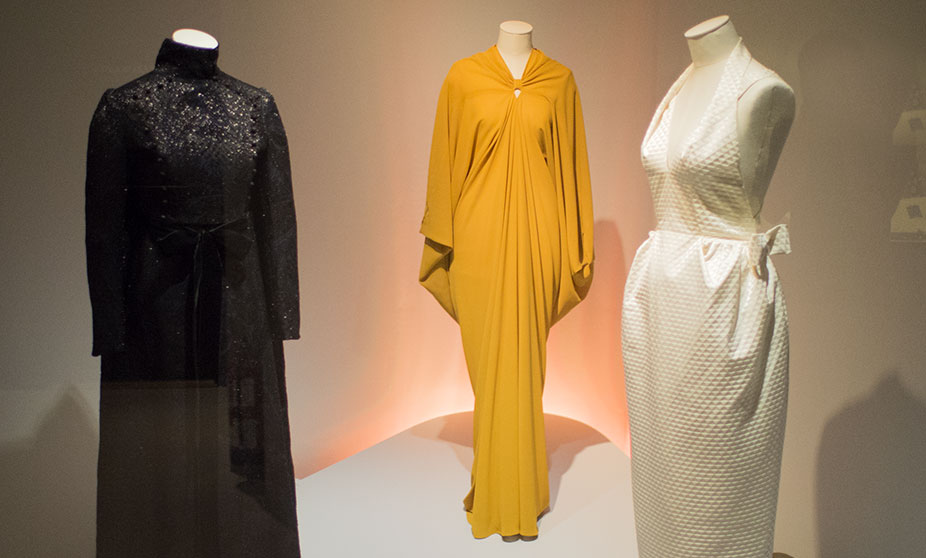 Dresses in the Balenciaga Museum

If design and fashion is your thing, then a visit to the

Cristobal Balenciaga Museum is highly recommended. Balenciaga, born in Getaria in 1895, was a true fashion innovator. He was respected (and is still today) throughout the fashion world for both his techniques and construction as well as his perfectionism. The museum dedicated to him opened in 2011. It is housed in two separate buildings that are connected. One is a large modern building and the other is the Aldamar Palace, where Balenciaga spent much of his childhood since his mother worked as a tailor for the owners of the palace, the marquises Casa Torre. This is where Balenciaga first came into contact with haute couture and it is quite fitting that the palace is now part of the museum.

Getaria also has another very famous son, Juan Sebastián Elcano. Elcano was an explorer who completed the first circumnavigation of the world. You will see a couple of statues in his honor around the town, for example, in the square in front of the town hall. The biggest monument to Elcano is located on the main road that intersects the town, right before you reach the Malkorbe beach.

The town of Zarautz is only 3 kilometers away from Getaria and there is a walking path by the coast connecting both of them. You will see locals of all ages on it, enjoying the breeze of the Cantabrian Sea while exercising or just going for a walk.

Hotels in Getaria
We have hand selected a few great hotels in Getaria, Spain. However, if you want to see a complete listing of all available hotels, be sure to use the search function below. 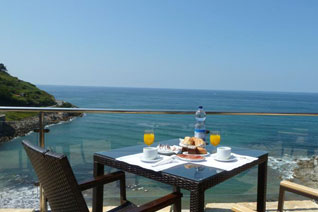 Hotel Itxas Gain – $$
Charming and traditional hotel situated next to Getaria’s beach with views of the Cantabrian Sea. The atmosphere at the hotel is comfortable and quite. The rooms are decorated in rustic style with wooden floors and feature free WiFi. 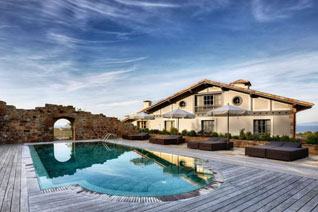 Hotel Iturregi – $$$
Luxurious rural hotel situated among the green hills full of vineyards that surround Getaria. It offers impressive views of the Mount San Antón and a relaxed atmosphere. There is free WiFi and free parking. 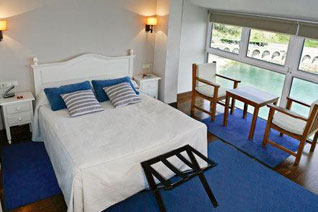 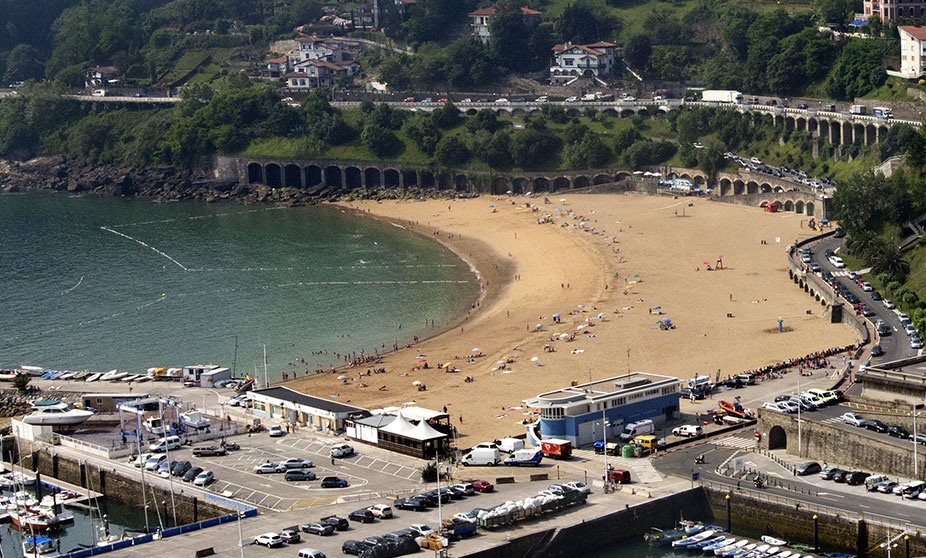 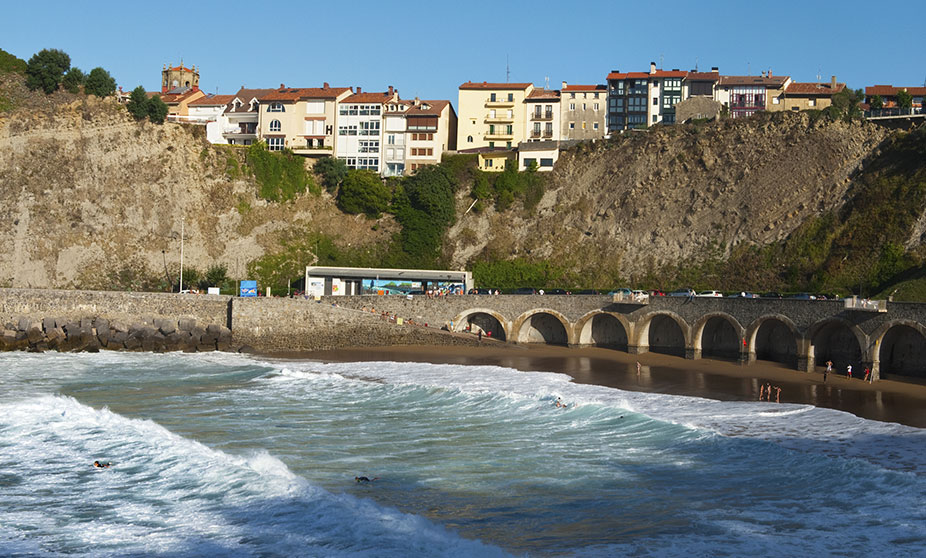 Gaztetape Beach
Gaztetape is a sandy beach (200m long) located at the western end of Getaria. It is windier and has stronger waves than the beach situated at the other end of the town (Malkorbe). For this reason, it is often frequented by surfers.

There is a parking lot right next to it, however, it will cost a few euros to park there. The lifeguard service operates from 10 am to 8 pm. There are showers and bathrooms.

There is a parking lot next to it. The lifeguard service operates from 10 am to 8 pm. There are showers, bathrooms and bars. Moreover, there is also a sport area where it is possible to practice volleyball, canoeing, paddleboarding, etc.

Orruaga beach
Situated half way between the towns of Zumaia and Getaria, Orruaga is a 300m long rocky beach. There isn’t any service. Be careful with the strong waves! 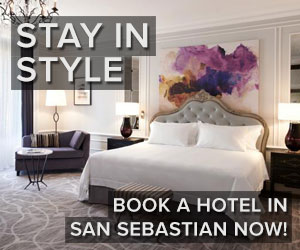 Once you arrive in Getaria everything is reachable by foot.

PLANE – The closest airport is the one of San Sebastian which is located 43 km away (about 35 minutes). The airport of Bilbao is located 80 km away (about an hour). However, there isn’t direct transport from these airports to Getaria.

CAR – Getaria is located between the towns of Zumaia and Zarautz, on the coast road N634. It is about 25 minutes away from San Sebastián, 1 hour from Bilbao or Vitoria.

BUS – There isn't a bus station in Getaria, but the buses from the company Euskotren offer a service in town (line Zumaia – San Sebastián).

TRAIN – There isn’t a train stop in Getaria. The closest stops are located in the neighbor towns of Zumaia and Zarautz. 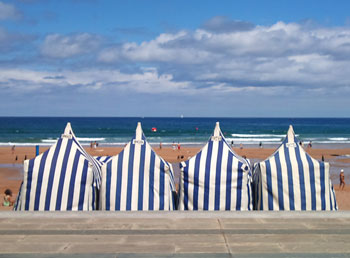 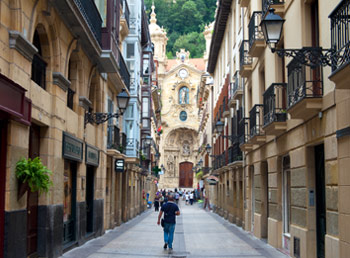 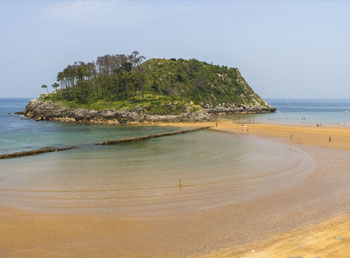 Map – Things to Do in Getaria